To all those who have noticed that the lineup has changed, but not the top banner: that is due to the fact that my tech expertise doesn’t extend that far, yet. Apologies in advance; I’m still learning.

THE RAYMOND AND MR TIMPKINS REVUE 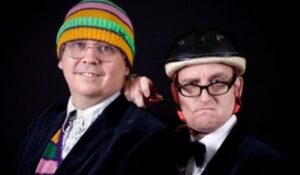 A comedy twosome with over two decades of mucking about behind them, they have been everywhere from New Zealand to The Falklands and Exeter to Edinburgh with many a stop in between. In late 2019 they won the UK Comedy Awards, Comedian of the Year award. 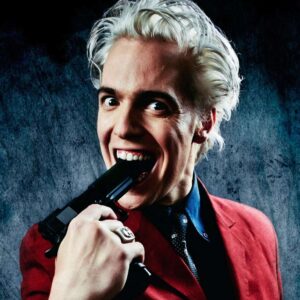 Fin Taylor has had to pull out of this gig, but we have an amazing replacement in John Robertson.
John Robertson is a comedian, streamer, children’s author, improviser, actor, videogame writer, insult comic and manic hurricane man who has to be seen to be believed.
He’s the winner of many awards and consistently produces four and five star reviewed shows.
‘A manic and quick-witted revelation’ – The Scotsman
Here’s a creepily relevant clip from his set a number of years ago: 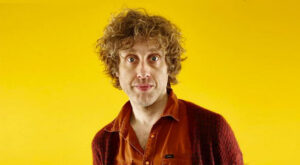 Richard began stand-up comedy in 2011 and has won several awards, written and performed three acclaimed shows at the Edinburgh Festival and club sets at Up The Creek, Komedia, Latitude Festival, XS Malarkey and in a bath tub during a house party.
‘Painfully funny… An up and coming talent that deserves a larger audience.’ **** EdFest mag
‘Warm, personal, unique, very funny.’ **** Chortle.