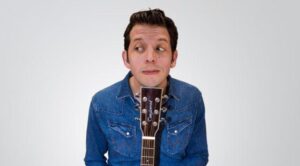 We all need a laugh right now. And some music. So:

JONNY AWSUM exploded onto the comedy scene with a crowd-pleasing set, performing his special feel-good brand of musical comedy all over the world and becoming a much sought-after live act.

In 2017, Jonny was broadcast to huge acclaim on the nation’s biggest-rating ITV show, Britain’s Got Talent. Performing alongside Ant & Dec, Jonny won a standing ovation from the theatre audience, a unanimous vote of approval from the judges and was seen by 11 million TV viewers. Jonny was broadcast numerous times throughout the series and made it all the way to the Live Semi-Finals. His performances on the show have been viewed more than 30 million times on YouTube.
Please arrive in your groups where possible and make sure you’re all wearing masks. You will asked to sign in and taken to your correctly distanced table. Drinks will be via table service and you are asked to remain seated unless you need a comfort break. NON COMPLIANT PEOPLE WILL BE ASKED TO LEAVE; I DON’T CARE IF YOU THINK IT’S A BIG CONSPIRACY.

MARK SIMMONS is an exceptional one-liner comedian. It won him a place in Dave’s prestigious Best Joke of The Fringe in Edinburgh 2017. His solo show at the festival, One-Linerer was also a huge hit, with sell out shows every day and was nominated Best Show by the Amused Moose Comedy Award Fringe Show 2017. He then continued this success with his follow-up show, One-Linererer, which was also a sell out!

PLEASE NOTE THE NEW VENUE!! ANYONE TURNING UP TO RUISLIP WILL BE SORELY DISAPPOINTED