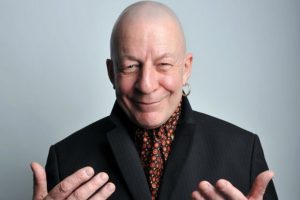 In 2016, Jeff Innocent was awarded the ‘best live club comedian’. As a stand up comedian he has reached near legendary status among his peers and audience alike by staying at the top of his game for over 15 years. He was voted Runner Up in the Facebook Poll for Best Live Club Comedian 2013 and 2014, won Best In Fest at the Norwich Comedy Festival 2014 and was nominated in the 2015 Chortle Awards Best Live Club Act catefory.

His unique appeal lies in the contrast between his East End ‘Geezer’ appearance and demeanour, and his educated, philosophical delivery and subject matter. Inspiring the guardian to describe him as a comedian with, ‘The body of a nightclub bouncer and the brains of a university boffin’.

This is the first time in 8 years I’ve managed to book him. Come and see why he’s so, so busy.

JOSH HOWIE will also be appearing on the night, bringing with him his sharp, abrasive, yet lovable comedy. With such wit and succession of one-liners it is impossible not to be impressed.
★★★★ Sunday Express

JONATHAN ELSTON is the compere – say no more!