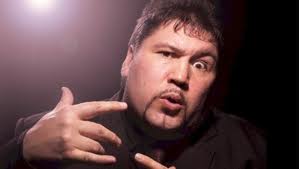 Born and bred in London’s East End, Ricky Grover tried his hand as a hairdresser and a boxer before becoming an actor/writer/comedian and stalwart of the UK comedy circuit and the Edinburgh Fringe Festival. Illiterate until he was in his early thirties, he is now a prolific, award-winning writer. His gangster character Bulla was not only featured on Channel 4’s The 11 O’Clock Show but was interviewed on BBC TV by one of Bulla’s biggest fans – the one-and-only chat show host Michael Parkinson. He’s made cameo appearances in Red Dwarf, Not Going Out and presented the critically-acclaimed documentary F*** Off I’m Fat for BBC TV. On TV Most recently Ricky appeared on Eastenders as Andrew Cotton.

Also joining us on the night is Nick Dixon.

Nick recently smashed his second performance on the TV show Comedy Central at the Comedy Store and was recently on BGT, being suitably rude to Mr Cowell.

He was also chosen from his YouTube clip to write jokes on a new Disney movie with Hollywood superstar WILL SMITH!

You may have also seen him in a national TV ad for GoCompare, where he showed incredible acting range in nailing the role of a mumbling discontented white man with a beard.

Finally, we have GEOFF BOYZ. Geoff first made his debut at the Edinburgh Fringe back in the 90’s where he hosted Best of Scottish Comedy. He followed that up with his solo stand-up show, Why? and Noises and Other Announcements, which were both a huge hit. Since then, he has continued to be in high demand on the stand-up and corporate circuits.