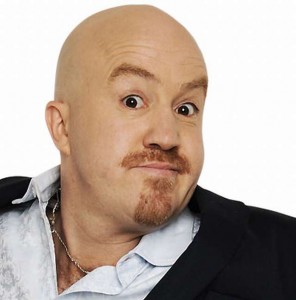 Andy started his career writing for Weekending and went on to become one of the main writers on the ground-breaking Spitting Image satirical puppet show. Andy has performed on numerous radio & TV shows including Live at the Apollo, Mock the Week, QI, Saturday Live, The Stand Up Show, The Comedy Store, They Think It’s All Over, The PMQ show, Scrooby Trevithick and Parsons & Naylor’s Pull-Out Sections.

Having won the Time Out Comedy Award in 2002 he has performed his stand-up all over the world from the prestigious Montreal and Kilkenny comedy festivals to touring Australia and New Zealand. To date he has done three sell-out National tours and in 2009 he released his debut DVD ‘Britain’s Got Idiots’, which was followed up by ‘Gruntled’ in 2011 and ‘Slacktivist’ in 2013.

Daisy Earl will making her Bunker debut on the night. Following a sell-out show at the Adelaide Fringe in 2016, Daisy returned to the UK to scoop ‘Best Newcomer’ at the Chortle Live Comedy Awards before performing two further sell-outs runs at the Edinburgh Fringe in 2016 and 2017.
Half Scottish, Daisy has performed regularly at the prestigious Stand venues in Scotland and was invited to perform at the ‘Scottish Comedian of the Year’ Winner’s Show during the Edinburgh Fringe in 2016. Daisy now resides in London, where she continues to make a splash on the comedy scene; performing in venues across the UK and earning a reputation as a promising and highly original talent. She recently supported Tom Stade on his nationwide tour and has just gone through to the regional final for ‘The Funny Women Awards ‘2018.

Russell Hicks is your compere, remember him from the Milton Jones night?