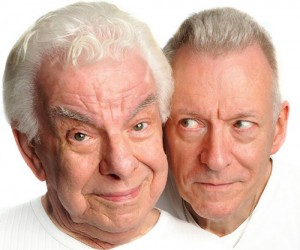 Barry has, rightfully, garnered a healthy respect for his legendary comedy writing: Morecombe & Wise, Tommy Cooper, Kenny Everett, Bob Hope and Jack Benny being a mere handful of household names who’ve profited from his fecund pen.
As a working standup he still continues to travel the country performing solo shows and touring a live version of Radio 4’s comedy flagship of 37 years(!) “I’m Sorry I Haven’t A Clue”

Under his real name,Tony De Meur, Ronnie was lead singer/guitarist/songwriter for seminal cult rock band Fabulous Poodles who achieved a degree of fame and notoriety in The States resulting in them outselling both The Clash and The Jam over there back in the late 70s. He has since carved several careers for himself as (Oscar nominated!) songwriter, musician and standup.